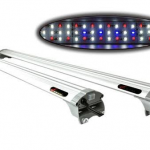 This Contemporary, Ultra Slim designed LED lighting fixture features a series of LEDs to promote Marine Refugium & Freshwater growth. Unlike the Ray II, which incorporates multiple High Output LEDS pinched together for high light output, the FugeRay Planted features a more evenly spaced LED alignment.  This is deal for refugium purposes as well as low-medium light needy aquariums. The FugeRay also features moonlights on a separate switch. This can be activated during the evening to give the aquarium a pleasant moonlight tone. All models feature a moisture resistant PC Splash Guard to protect against water mishaps.

Differentiating itself from the original Finnex Fuge RAY LED, the Planted+ series offers true 660nm red LEDs. Unlike competing LED fixtures offering a cheaper and mass produced labeled ‘RED’ LED, the Finnex Planted+ has incorporated TRUE 660nm RED LEDs.  Studies found this to be one of the most efficient wavelengths for plant photosynthesis. The true 660nm red LEDs offer a warmer tone throughout one’s aquarium. Like the Original Finnex Fuge RAY LED, the FugeRAY Planted+ has the blue LED moonlight feature.

The durable high output LED bulbs are built to last 40,000+ hours. With a LED spread of 120 degrees, this slim LED bar lights up the largest of aquariums. A unique leg fixture allows this LED light to mount on various sized aquariums and sump setups. To extend LED bulb longevity, the circuit boards are built with high quality aluminum and the fixture itself acts as the heat sync to allow ample cooling and superior heat dissipation.

Discus are found in floodplain lakes and flooded forests of the lowland Amazon River basin and some of its tributaries, including the Rio Negro.  These areas experience extreme changes in water level due to seasonal flooding.  Discus tend to congregate near fallen trees, known as “galhadas”, along the shore.  They prefer quiet water, and are rarely found in areas where there is strong current or wave action.

Discus prefer warm, soft, acidic water.  pH should be between 6.0 and 7.0, with hardness between 1° and 4° dKH (18 to 70 ppm).  Temperature should be kept between 82° and 89° F. Water conditions for both wild and hybrid discus are the same. While captive bred discus can be kept in dechlorinated tap water  reverse osmosis or deionized water supplemented will ensure the the best conditions. Discus require pristine water quality, and depending on the filtration system being used, a weekly or bi-weekly water change of 10% to 25% is highly recommended. Don’t forget to treat tap water with conditioner before refilling your aquarium!

Discus grow to be quite large, and full sized discus will require an aquarium of 50 gallons or larger when they reach adult size.  Tall aquariums are best, to accommodate their body shape.  Current should be gentle, and décor if used at all should include large broadleaf plants and driftwood that is arranged vertically to simulate downed branches and trees.  A few floating plants can also be added to provide shaded areas and cover. Substrate should be fine to medium grade and smooth surfaced, as discus like to forage along the bottom for food.

Discus are generally calm, peaceful fish, but as cichlids they can be aggressive toward one another, especially when attempting to pair off and spawn.  Shy or submissive fish should be removed if they are unable to compete. Most serious hobbyists do not mix their discus with too many other species. However, suitable aquarium mates include cardinal tetras, neons, emperor and rummy nose tetras, as well as clown loaches and dwarf cichlids such as rams and Apistogramma species. All of these fish tolerate the high temperatures and low pH/hardness required by discus.

What do Discus Eat?

In nature discus eat a considerable amount of plant material and detritus, but also forage along the bottom looking for worms and small crustaceans.  They are omnivores and will thrive on freeze dried black worms, beefheart, frozen blood worms, and a variety of pellet and flake food. Frozen and live foods may be fed as treats or to help induce spawning.  For best results, rotate their diet daily and feed only what they can consume in 2 to 3 minutes, once or twice a day.

Captive bred discus will pair up and spawn relatively easily, but young, inexperienced parents may eat their eggs the first few times, particularly if other fish are present.  After hatching the young feed on heavy body mucus secreted by the parents for a few days until they begin to free-swim.  Parents will transfer the young back and forth several times a day.